LAPD Officer Roberto Sanchez, was killed early in the morning of Saturday May, 3rd. According to the LAPD, Officer Sanchez was involved in a Hit & Run accident at 3:45 am, when an SUV “T-boned” his patrol car, killing Officer Sanchez and injuring his partner, who remains hospitalized.

It all happened when Officer Sanchez and 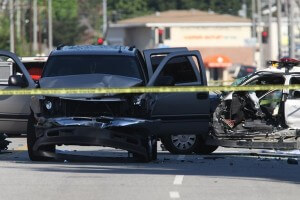 his partner were following a car that was making a U-turn, their vehicle was then slammed on the driver’s side by oncoming SUV.

The accident, which took place near the West Anaheim Street and President Avenue Intersection was the third accident to claim the life of an on duty LAPD Officer in less than two months. The other two deaths were Officer Nicholas Lee, who died in March and Officer Chris Cortijo, a motorcycle officer killed in April.

The mourning of Officer Sanchez has been felt by all of Los Angeles, even Gov. Jerry Brown said in a statement: “Californians will not forget Officer Sanchez’s service to his community and the sacrifice of the family he’s left behind.”

The driver of the SUV that collided with Sanchez’s patrol car fled the scene on foot after the accident. However a “person of interest” was detained by the LAPD shortly after the accident according to LAPD Commander Andrew Smith.

To add to the bad news, another LAPD officer died on the same night due to a medical condition. “This is a hard time for the LAPD family having lost two dedicated and well liked officers in the last 24 hours,” Los Angeles Protective League President Tyler Izen said.

AS of Sunday the LAPD has not given any information on whether any arrests have been made in connection to the collision.