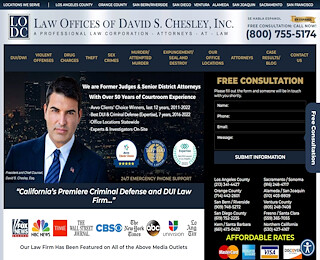 The Law Offices of David S. Chesley, INC was voted best California DUI lawyers (expertise) in 2016, 2017, and 2018. If you have been charged with a DUI in California, settle for nothing less than the best legal representation available. We are a team of fighters who mount aggressive defenses on behalf of our clients.

There seems to be a tendency for people to downplay the severity of a DUI charge. Make no mistake; this is not just another traffic infraction. At best, a DUI is a Class A Misdemeanor that carries a penalty of up to one year in a county jail and heavy fines. If this is not your first DUI, you might be facing a felony charge.

If convicted, the judge will put you on probation for 3-5 years. This is not the kind of probation that involves a probation officer. This is just Summary Probation to the Court. What this means is that if you commit another crime on this probation or fail to adhere to DUI terms, you can be sentenced to up to 6 months in jail which can run concurrent or consecutive to any new charges who acquire.

Typically, the fine amount for a DUI conviction is about $2,000. That fine amount can often be satisfied by community service or jail time. Fortunately, the judges are usually good about giving people time to pay their fines.

On a first-time conviction, the alcohol program is usually a three-month term. Most people go once a week for three months. However, if you refused to take the blood or breath test or you BAC was measured at 0.20 or higher, the court will impose an automatic nine-month DUI school term.

There is a potential for up to six months in jail for a first-time DUI conviction. In most counties, the judges will not impose jail time on a standard first-time DUI if there are no aggravating factors. Riverside County and Ventura County are more strict and typically impose at least a few days in jail on a first-time DUI.

If you need the best DUI California law firm on your side, contact the Law Offices of David S. Chesley, INC today. We will make sure your rights are protected and put together an aggressive defense to stop you from being convicted.